Here are some bio information borrowed from Paul’s website:

I started building guitars in 1985, using the traditional fan braced design, but after eight years of building I came to realise that the sound of the traditional guitar, as beautiful as it is, was always missing something that left me, personally, wanting more, even though my guitars were receiving flattering comments. It wasn’t until I had built my first lattice braced guitar that I finally heard the sound that had been in my head for years. In hindsight, I know now that this sound that I am now producing, is simply not possible to obtain using the tried and true traditional processes. With the considerable extra time and effort it takes to carefully produce a lattice braced guitar, who would do it unless they were totally commited to their own sound image? The over-riding guide for me is, quite simply, musicality. In other words, whatever makes the instrument more musical for the player, the audience and the maker, should be pursued, even if this means one has to move away, to some degree or other, from what is commonly held as the traditional way. Looking at it another way, tradition is an ongoing process. Just ask torres.
All my current instruments are lattice braced in either spruce (Swiss, Canadian or American) or w.r.cedar, with back and sides available in a range of woods. I use the great old faithfull, Indian Rosewood, as well as others like Cocobolo, Stripey Ebony, and Australian woods like Tiger Myrtle, Fiddleback Blackwood, Jarrah etc. The backs are laminated with the dome back, which means there is no internal bracing. Very neat! My current choice of wood for necks is Tasmanian Oak, a very stable and strong creamy coloured wood which is a beautifull match for all the woods I use on the backs and sides, and it’s performance surpasses mahogany, maple or cedar. The instruments come with a 640mm scale length which allows for greater ease while playing, without detracting from the sound. I also build requinto guitars.
Many thanks to Greg Smallman for his input on the lattice form of construction over the years, and Jeroen Dilhorst for his ideas on such a smooth execution of the arm rest. 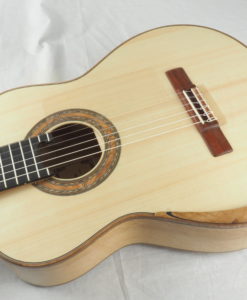 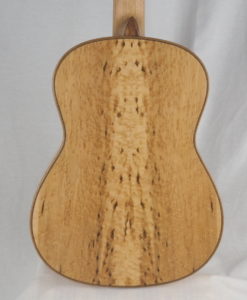 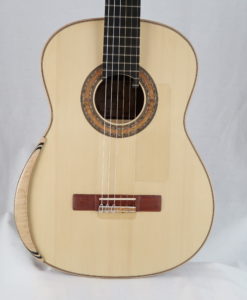