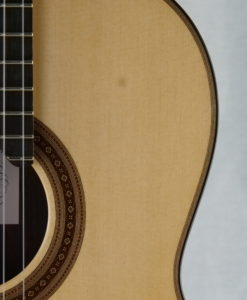 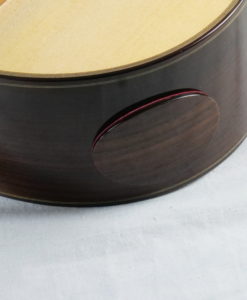 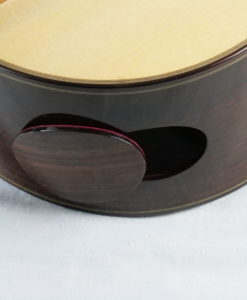 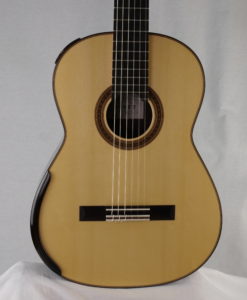 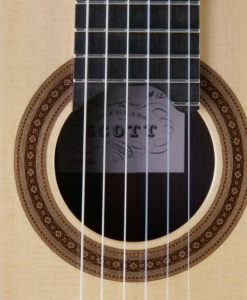 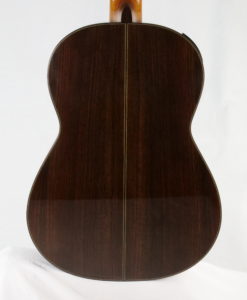 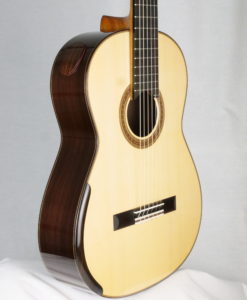 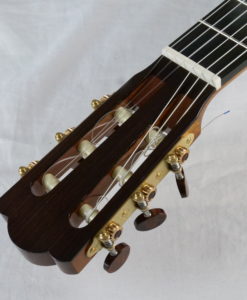 This guitar has been sold. The next one is due to arrive mid 2023. Contact us to hold the guitar

For a change: here is a fan-braced guitar from an amazing Canadian builder Douglass Scott. Douglass makes traditional guitars with a crystal-clear sound and great dynamics. What are his guitars offering? Simply a broader tonal palette, increased sustain, increased warmth, deeper bass, and more trebles. This No 212 comes with the following options, an armrest, Alessi tuners, and a sound port with a magnetic cover.

For a change: here is a fan-braced guitar from an amazing Canadian builder Douglass Scott. Douglass makes traditional guitars with a crystal-clear sound and great dynamics. What are his guitars offering? Simply a broader tonal palette, increased sustain, increased warmth, deeper bass, and more trebles. This No 212 comes with the following options, an armrest, Alessi tuners, and a sound port with a magnetic cover.

His guitars a played by many professional players and we advise you to have a look that the YT video of Tariq Hard that we have selected in our viewer.

Here is some information about Douglass :

I was born in Paris, France, and grew up living and traveling in various countries with my family before settling in Canada. I began learning to play the classical guitar in Singapore at the age of seven, not knowing that the instrument would become a major presence in my life. It was 1998 when I built my first guitar, and then a couple more, while at university majoring in music. During this time I became enamored with the challenge and mystery of creating musical instruments, and knew that I would continue building guitars in some capacity forever. I attended a guitar building school in order to learn more. Soon after, I had the opportunity to work in a guitar repair shop on Vancouver Island for a couple of years, and then to study and work closely over a handful of years with two veteran luthiers.

I have been building guitars full time since 2004 and still find the craft as captivating as ever. But now, rather than its challenge and mystery, it is more the appreciation that my customers have for what I do that fills this work with meaning.

My guitar design is at heart very traditional. You might recognize the inspiration of Friederich, Fleta and Torres for example in the construction. This is the best way I know to achieve an instrument with a lot of vitality, malleability, and colour, and to create the overall character of sound that I like to hear. This means a broad, linear, intuitive response in both tone colour and dynamic level; a disciplined, noble sound quality with even sustain note-to-note; and exceptional brilliance.