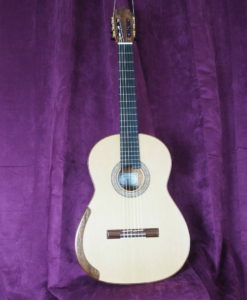 This classical guitar from the luthier John Price has been sold.

Our best selling lattice concert guitar: loud and balanced. The John Price’s classical guitars are among the best guitars you can find in the world. For once a spruce top lattice guitar from John Price : the spruce adds more brightness to the guitar which is already kind of clear. For those who are crazy abou spruce.

No youtube playlist videos to be found - maybe API key not set ? This is the feed - https://www.googleapis.com/youtube/v3/playlistItems?part=snippet&playlistId=PVPsd1kYR39D0iu1-qZW3TBYnhUfUvjF&key=AIzaSyDD5qFtvhPJxKvjUomTE_qCHWQZfszyoUQ&maxResults=3
The playlist identified with the request's playlistId parameter cannot be found.
Gallery 14PRI014-PL does not seem to have any videos.
SKU: 14PRI014 Categories: Classical guitar luthiers, John Price, Previously sold Tags: lattice, sold
Produits

This classical guitar from the luthier John Price has been sold.

John ¨Price specializes in making an arched, braceless back guitar, designed to maximise strength and allow better airflow inside the soundbox to enhance the projection of the instrument markedly. It has a ‘focusing’ effect on the classical guitar’s overall sound, and minimizes the dampening effect when the classical guitar is held too close to the body.

If one will be forced to choose … she will be this one .. a balanced lattice astonishing by her musical qualities. Quite light for a lattice – 2,2 kg – with a wide sound range with warm and thick treebles and big bass. The first feeling is the flexibility of the guitar with easy piano and big forte, lots of contrasts and color. 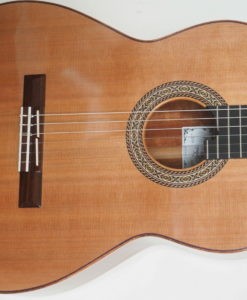